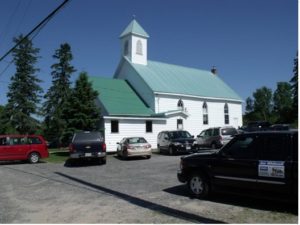 Our Purpose and Mission

“Go therefore and make disciples of all the nations, baptizing them in the name of the Father, and the Son, and the Holy Spirit, teaching them to observe all that I commanded you; and lo, I am with you always, even to the end of the age.” Matthew 28: 19, 20

As a dynamic church proclaiming the Word of God, we purpose to make disciples of Christ by:

Arnstein Evangelical Baptist Church began as the Mills Class Mission which first met in 1885 in the little German settlement of Arnstein, Ontario. It became established as a church when, as the Minutes Book reads, “A good number of souls having believed on God for salvation, a congregation of the Evangelical Church was formed here in the Mills Township on the 17th of October 1887.”

A small log building was constructed in 1888 and was used until the present structure was built in 1905. All the services were delivered in German until 1916, when the morning service was repeated in English in the evening! Gradually less German was spoken in the area and the sermons were all given in English.

Today we have 48 members with the majority being seniors. There are usually between 50 and 60 who attend regularly in the winter months and upwards of 130 during the summer and special holidays.

As we approach our 130th anniversary, our ongoing prayer and hope for Arnstein Baptist Church is to reflect a Christ-like example to our community and to bring others into a saving relationship with Him. God has been pleased to bless our little country church with a love for God’s Word and joyful fellowship that keeps bringing visitors back. You will be warmly welcomed and that’s a promise!